The January and February ban on catching rockfish produced a nice surprise for Southern California anglers. Traditionally the winter months has sent the sportfishing industry out onto the deepwater banks in search of the tasty rockfish mainly because there was nothing else to fish for. Apparently, the ever abundant rockfish are in a state of decline so the moratorium was enacted. The new law states that anglers cannot catch or possess rockfish during the months of January and February. This really bent the sportfishing industry out of shape. Rockfish has always been the winter time savior for the sportboats and many landings thought they would go broke. Not so! Somebody found the halibut biting with reckless abandon.

Halibut have always disappeared in the winter time.At least that’s what everybody thought. A sportboat skipper took a group of anglers into deeper waters for a fishing trip and found the halibut biting like crazy. The rest is history as every sportboat in the area is now drifting across the areas in search of the flatties. One of the clues to this discovery was the endless line of gill nets that spread for miles in the 10 to 20 fathom stretches. We all knew they were netting some halibut but really had no idea as to how many. Anglers are catching and releasing hundreds of halibut a day. One fish in 20 will stretch the 22 inches necessary by law and the fishermen are literally wading through them. But the new fishery has answered some interesting questions about the halibut habitat and introduced some new tackle techniques.

Historically, halibut fishing has always been done through the spring, summer and fall months. They were known to be located in the coastal shallow waters, some just behind the breaker line. This winter the fish are being caught from 50 to 100 feet deep. So it appears that the flatties do not disappear in the winter but move out into deeper water. This depth range seems to be the magical and each day might find the butts at a different depth level within that range. When the skippers finds that level they try to maintain all their fishing at that depth for the days fishing. The next day it may be deeper or shallower but usually not less than 50 feet. I suspect the depth level doesn’t change for finding the butts anywhere along the coast.

At Catalina the 100 foot level occurs less than 1/2 mile off the shore. In Santa Monica Bay it’s about 2 miles off shore. In the Los Angeles area it’s about 6 miles out. Anyway, catching halibut at 100 feet can be very difficult for a sportboat loaded with 50 passengers. If you fish from a sportboat take along some heavy sinkers. Remember that all the passengers will be on one side of the boat, all dragging the bottom with at least 3 ounce sinkers. You can escape many tangles by using a heavier sinker than the other anglers. The heavier sinker will keep your bait inside of all the others as you drift along and besides that, your bait will pass over a halibut before your competitor’s bait arrives. If the wind is up I can’t tell you how difficult it is to land a 20 lb flattie. I would suggest that you use no less than 12 pound test line and 15 pound if the wind is up.

All the sportboat skippers are recommending the use of two hook tandems or fish traps. I really believe that a halibut of legal size doesn’t miss taking the bait and you really don’t need a tandem. The little ones are mostly caught by the second hook. This is difficult to prove but I have seen large 20 lb flatties inhale a bait in some of my diving adventures. They do it so quick and with such force you will miss the action if you blink. The small boat angler can fish the deep water much easier than the sportboats. He has the ability to slow the drift with the use of a sea anchor. He can quickly turn the boat into the wind and chase the giant halibut, and further the anglers have more space to work in by not being jammed together. Finally he can anchor quickly over an area where the butts suddenly attack all the baits.

One of my favorite tricks is to take a GPS bearing on an area that sustains numerous bites by the butts. Later, return to that spot and anchor. Halibut are never alone. When you get a lot of bait stops it means many halibut are ambushing the area your bait slid over. By remaining stationary on the anchor you can methodically work the area for 360 degrees using smaller weight sinkers and and much lighter line. I like to cast out as far as possible and inch the bait back. If no strike occurs cast out in a different direction working the entire area, foot by foot. When the area has been completely tested I pull the anchor and start the drift again, Slip sinkers both egg and torpedo seem to be what the anglers like. The sinkers are blocked from sliding down onto the hook with a pinched on split shot or an attached swivel. The leader is about 2 feet to 3 feet long. Hook size should fit the bait.

This season the predominant bait has been sardines. They are very large baits and you can use up to 5/0 size hooks. Lately there has been a trend to treble hooks which work very well but are brutal to a small fish that needs releasing. By far the most popular rig is the fish trap. This device is tied by placing a selective hook a short distance in front of a treble tied on at the end of the line. The latest fish trap is tied together with a small wire connecting the two hooks. I like to use a simple dropper leader with a chrome sinker on the end. The guys in Santa Monica Bay tie up their terminal tackle in this manner, so it must be suitable because they really catch the fish. The important part of this technique, explained to me once by an old veteran, is to tie in the dropper as long as the distance from the knot to the sinker. If you have a 2 foot dropper the distance from the sinker to the knot must also be 2 feet. Don’t ask me why. Maybe the sinker bouncing along the bottom scares the struggling bait in such a way as to attract the butts. Knots are important. Jed Welch came up with a knot that allows the front hook on a fish trap to be adjusted up and down to fit the bait length. This way you can hook the bait in the tail and then slide the front hook to a perfect entry through the baits nose.

A barrel knot or a surgeons knot can be used for the leader, but if you use the surgeon knot it’s best to have both lines of equal breaking strength. With different test lines the smaller test lines seem to break off easily with the the surgeons knot, especially if the smaller test is tied into the standing line. Also if you use the surgeons knot tie the hook to the standing line and place the sinker on the addition. Be kind to the halibut. Even though there is a minimum of 22 inches, the fish is still very small. If you already have a nice flattie, throw-em all back. One large butt produces more meat per pound than any fish swimming. By the way, when you measure a butt make sure his mouth is closed. 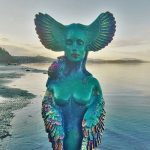 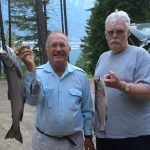 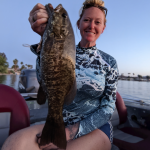