Catch-and-release is not only becoming popular in angling circles in U.S., it’s becoming an important fishing philosophy in many countries. Catch-and-release lets anglers enjoy their sport but not diminish the resource.

But PETA, PISCES and other anti-fishing organizations claim this approach is still cruel and that the fish suffers tremendous traumatic and physical effects.

Here’s their propaganda: “It is easy to see that angling causes suffering to fish regardless of whether or not the fish is returned. Traumatized and injured fish returned to the water can either die from injuries, or from stress of being caught. Further, fish take time to recover from being caught and during that time are extremely vulnerable to attack and damage from the physical environment…”

PISCES prefers that fish are killed when caught. Well, PISCES I hate to break the news to you, but catch-and-release is working and lakes, rivers and oceans are thriving because of it.

How about the trauma and injury, though? There was one trout in Pennsylvania that was caught more than 30 times and released (the fish was unusual marked so the anglers knew it was the same trout).

The angling world has worked too hard to encourage catch-and-release to let PISCES and PETA undermine it. 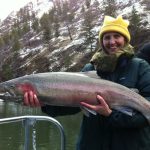