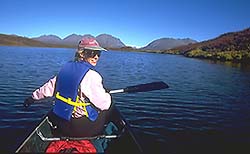 Portaging south from Upper Tangle to Dickey Lake takes floaters into the Gulkana drainage. The headwaters of the Gulkana’s Middle Fork exit Dickey’s southeast tip. Paddlers may be lulled into complacency in the easy floating for the first three miles of the outlet stream. Then the flow plunges into a steep, boulder-strewn canyon with Class III and IV rapids before hitting the Middle Fork. The full trip down the Middle Fork from Tangle Lakes to Sourdough is 76 miles over 6 to 7 days. This trip is an isolated wilderness experience where moose, grizzly and wolves will watch you pass.

The Best Las Vegas Destinations for a Girls’ Trip

Making Your Next Philly Trip Easier