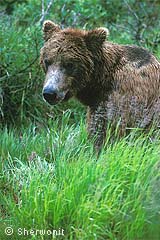 A Gathering of Bears

We have barely finished storing away food and setting up tents among tall meadow plants when a family of brown bears comes ambling down the narrow sand beach that fronts our camp. The bears are walking slowly, without menace, eating as they go. Still, they’re moving ever closer. In the lead is a large female with a beautiful milk chocolate-colored coat that has not yet begun to shed. And trailing her in single file are four tiny cubs. Darker than their mom, the cubs were born in January or February. Only a pound or so at birth, the largest of the four in late July weighs 25 to 30 pounds. The runt of the litter weighs half as much; incredibly small and fragile-looking, he has the cute appeal of a real live teddy bear.

In most places, the steady approach of a brown bear family would be cause for concern, perhaps even alarm, because females with cubs are notoriously aggressive. The five of us who watch the bears — soon to be joined by a half-dozen others — would likely announce our presence by talking loudly, maybe while waving our arms and slowly retreating. We would crowd together, to increase our size, and worry about the bears entering our camp. Someone in the group might reach for a firearm or pepper spray. None of that happens, however. Not here, with this particular female. Newly arrived at McNeil River State Game Sanctuary and accompanied by a Fish and Game bear biologist, we watch calmly and quietly from the edge of camp while the mom and her cubs forage among sedges that grow where beach sand gives way to expansive mud flats. We talk in whispered tones of our good fortune, as the bears come to within 100 feet, then 80, then 40. It’s clear that their approach has nothing to do with us; it just so happens that the mother’s beach foraging has brought the family in our direction. The cubs look toward us now and then with an apparent mix of curiosity and anxiety, but their mom hardly pays us any heed as she hungrily gulps down clumps of green blades.

4 Must-See US Destinations for WWII Enthusiasts