Less than a half-mile from the Denali park road and only ten minutes into our three-night backpacking trip, Dan Hall and I come to a sudden, unplanned stop. Seventy-five feet upstream, a brownish form moves among a clump of creek-bed willows. Then, sensing us, it too becomes still. The bus driver had cautioned us that this valley is prime grizzly habitat and”BEAR” is the first thought to run through my mind. But within moments my imagined grizzly is transformed into a small, rusty brown critter with a long bushy tail: An adult red fox steps slowly out of the willows, a limp ground squirrel clutched in its jaws. Instant relief, tinged with embarrassment. How could I mistake a fox for a bear?

The fox stares at us a few seconds, as though judging our intent. Then, keeping a safe distance, it scurries downstream and quickly disappears around a bend, headed home with breakfast for its litter of kits.

Even before this meeting we’d been making noise: “YO, bear. HELLO, bear. Humans passing through.” Clap, clap, clap. But given this midmorning wake-up call, we increase the volume of our greetings, especially where stands of willow restrict our vision. The absolute last thing we want to do is surprise a grizzly.

The clearwater creek we’re following is a small one, about two and a half miles long. In mid June it’s less than ten feet wide and under a foot deep in most places, so stream crossings are not a problem. But the creek bed is five to ten times as wide and filled with gravel to boulder-size rocks, a hint of the stream’s greatly increased volume and power when flooded.

Even with its abundant boulders and occasional clumps of dense willow, the mostly dry creek channel makes for easy walking. Easier, certainly, than the thick brush that borders the creek’s lower sections. Except for one short stretch of narrow canyon, it becomes our pathway into Denali National Park’s Outer Range, an uplifted group of rocks that rises to 6,200 feet. Easily reached from the park road between Denali’s entrance area and the Eielson Visitor Center (though some bushwhacking may be necessary, depending on the choice of route), the range’s south-facing slopes normally lose their snow cover early in the summer, which makes them an especially popular backpacking destination in June and early July.

Unlike the nearby Alaska Range, these hills were untouched by Ice Age glaciers; so instead of broad, U-shape valleys, they are dissected by narrow, stream-cut, V-shape drainages. And though modestly sized when compared to their neighbors to the south, the Outer Range’s tallest hills give expansive views of the north Denali region. Happily for backcountry travelers, most can be ascended even by nonclimbers.

In one respect, the Outer and Alaska Ranges are alike: Beyond the park’s entrance area and road corridor, each is managed as a”trailless wilderness” free of trailheads, signposts, campgrounds, and developed pathways. Backpackers and hikers are expected to plan their own trips, do their own route-finding, and use their own best judgment when traveling through Denali National Park’s backcountry. Here the emphasis is on self-sufficiency and self-discovery. That’s not to say backpackers can go wherever they want, whenever they want: Denali’s trailless wilderness is divided into 43 units and most have quotas of two to eight overnight visitors. Anyone planning to camp in the backcountry must get a permit beforehand, from the park’s visitor center. 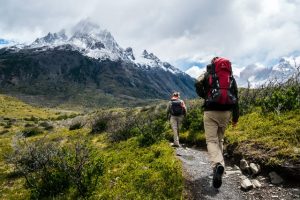